To Hold the Holytides: A Collection of Articles on the Anglo-Saxon Heathen Ritual Year, Its Keeping and Its Customs 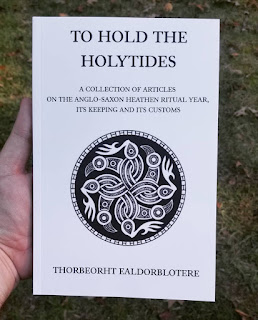 To Hold the Holytides: A Collection of Articles on the Anglo-Saxon Heathen Ritual Year, Its Keeping and Its Customs by Þórbeorht Ealdorblótere. 158 pages. $18. Released November 2020.

To Hold the Holytides is a collection of Théodish writings on the Anglo-Saxon heathen ritual year that explores how many pre-Christian customs were kept alive in both the seasonal celebrations of the Anglican church and in the folk traditions of the English countryside. Moreover, this work affords the contemporary reader a rare glimpse into how such ancient thews have been rekindled and put into practice by Anglo-Saxon Théodsmen today. As a companion to “By the Sun, the Stars, and the Moon: Anglo-Saxon Heathen Time-keeping,” this book also includes articles on how the dates for such heathen holytides as Módraniht, Éastre, Midsumor, and Winterfylleþ are determined and as well as observations on the span of Yuletide as it was held in Anglo-Saxon England.

What Does Heathenry Mean? by Gárman Lord 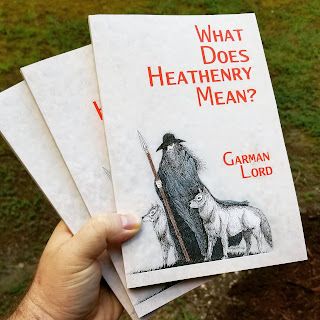 Translated from Old English by Þórbeorht, Ealdorblótere of the Ealdríce, for his book Of Ghosts and Godpoles: Theodish Essays Pertaining to the Reconstruction of Saxon Heathen Belief, Both Old and Anglo.


[i] unknown, strange
[ii] Sigemund the son of Wæl
[iii]  Are equipped without knowledge (do not know)
[iv] Seamus Heaney translates this as “feuds and foul doings.”  Benjamin Slade translated it as “feuds and feats of arms.”  Fyren (Firen) has only negative connotations. Bosworth-Toller defines it as “wicked deed, sin, crime.”  T’would seem as if Sigemund was not without fault.
[v] Literally, “war’s hard” with hard being a noun meaning “hard object.”
[vi] Wrætlíc from wræt, “ornament, work of art, jewel” and líc (-like). Most translations render this as “wondrous” for the purpose of alliterating with Wyrm. I have expounded upon this some to keep the alliteration yet convey the beauty of the beast.
[vii] This conveys the image of the dragon pinned through, like a butterfly, against the wall.
[viii] Drighten (warlord)-like, becoming of a warlord, becoming of a noble.
[ix] The OE: sweltan originally meant “to die”.
[x] Áglæca is generally translated as “monster” or “demon.”  Its etymology is disputed. It is generally agreed that ág means “wicked” yet læca could mean “leech,” an old world use for a healer, or it could possibly be a variant of lác, a word which means “play, sport, dance” but which also means “sacrifice.”
[xi] The lee of warriors, the shelter of warriors, a lord.
Posted by Þórbeorht Ealdorblótere at 10:33 AM No comments:

[I wrote this morning devotional not long after the Ealdríce was established in 2010. My guess is that it dates to 2011. - Þórbeorht]

Begin by standing before your weófod (altar) and lighting a candle.

With a Free Right and mind, I turn my will
ever towards that of a Right Good Will,
that the Three Wynns, from whence thew springs,
may take their root and grow within me.
I am my deeds, those before and behind;
in all things: Widsom, Wealthdeal, and Worthmind.
And from my trow may there sprout these leaves:
belief in the gods, love for my kin, leave for the king.
This day I begin, may in it worth I gain,
that I may wax in weal and grow in good name.


At this time, if you are in the habit of wearing a Þunreslecg (Þunor’s hammer pendant), it should be donned. After a few moments of silence, extinguish the candle and begin your day. 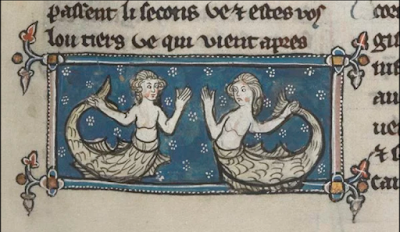 For some years now, it has been a tradition in the Ealdríce to drink a “green” beer at our Hréþmónaþ fainings.  We fully acknowledge that this is no thew of elder heathendom. Moreover, this odd custom has little to do with our worship of the goddess Hréþe.  Rather, this green beer is partaken of at Hréþmónaþ because that is the Anglo-Saxon month which, more or less, matches the month of March. And it is in March that we must drink this green beer.

One might mistakenly think that our custom of drinking a green beer in March springs from the Feast of Saint Patrick which also falls in the month of March.  After all, since the early 1900’s, publicans aplenty have dyed their brews with green food-coloring on that day.  Yet, the Ealdríce’s “green” beer has another origin altogether…an origin that is Scottish instead of Irish and one which speaks to the “ministry” of a mermaid rather than that of a saint. The Théodsmen of the Ealdríce are, after all, mickle worshippers of mermaids (Well, more so than we are of saints.)

Robert Chambers, in his book Popular Rhymes of Scotland (1826), recalled a story from Renfrewshire of a young maiden who died of consumption.  As her body was being born over a road near the sea, a mermaid raised her head above the water and offered this bit of herb-lore:

If they wad drink nettles in March,
and eat muggons in May,
sae mony braw maidens,
wadna gang to the clay.

If they would drink nettles in March,
and eat mugwort in May,
so many brave maidens
would not go the clay (their graves).


Thus, as our Ealdorblótere (chief priest) is a great believer in the leechcraft and wortcunning of mermaids, he brews for us a nettle ale each year. After all, mermaids are indeed a part of our Anglo-Saxon heathen lore and who are we to doubt a sea maiden's knowledge of land worts?

Known to the Anglo-Saxons as meremenen or merewíf, and to our Norse cousins as margygur and marmennill, mermaids, as we now know them, are among the many wights that make the waters their home. Gifted in soothsaying, witchcraft, and healing arts, mermaids can sometimes be helpful, as was the mermaid at Renfrewshire.  Yet they can also be quite deadly. In Old English writings, meremenen match the Sirens of Greek myth and in Beowulf, Grendel’s own monstrous mother is called a merewíf.  Thus, as with any wight of the utangeard (wilderness), one should be wise about how often, if ever, one has dealings with them.

Ah, but you didn’t begin reading this for a lesson in Théodish wight-lore.  It is the beer that you are keen to know more of, the green nettle beer. The truth be told, the beer is only “green” when it begins to brew as that is the color that the nettle leaves first give it.  Yet by the time that it is done it is a dark brown in color, though one may still discern in it an earthy, deep green hue. As for how it tastes, its “grassy” flavor is akin to the smell of freshly mowed hay. After all, we do not hop our housel ales like Protestants and so there is nothing to “bitter” the natural flavor of the nettle. Does it work you might ask? Well, thus far we have kept consumption away.

We’ll drink to that.

[This post was originally published on the 2nd of March 2019, on the Ealdríce's old blog.]
Posted by Þórbeorht Ealdorblótere at 12:50 PM No comments:

On the Worth of Béda’s Witness

The following was first published on the Ealdríce Théodish Fellowship’s old blog on the 4th of June 2017. 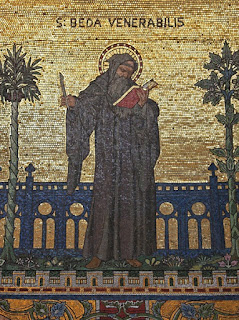 Of the worth of Béda’s witness, one would well remember that his childhood overlapped the end of heathendom as the belief held by Anglo-Saxon kings. Though but a babe or young boy, the witans of Sussex, Wessex and the Isle of Wight would all seem to have sat their last heathen kings within his lifetime.  And, if he was indeed born in 672 CE as is widely held, then Béda would have nearly been a man at fourteen winters when the Isle of Wight, the last heathen stronghold, fell to the Christian sword in 686 CE.  Even within his homeland of Northumbria, Wóden’s holiness was, however quickly quelled, rekindled by heathen kings for some months in 633 CE.  Moreover, such speaks only of heathendom as the king’s heap.  As witnessed in sundry penitential, homily, and lawcode, the leavings of the old belief lingered on for many years thereafter amid the churls of the countryside.

It may well be thought then that Béda knew far more about the old belief than any churchman who followed thereafter.  Unlike Ælfric of Eynsham and Wulfstan II of York, who in their homilies De falsis deis, that is Of False Gods, muddled the godlore of the Danes with that of the Romans and Greeks, Béda wrote of the Anglo-Saxon heathen thew as a thing in and of itself.  Indeed, though fewsome and fleeting, the insights afforded by Béda may well baffle nowtidely readers long used to ready word-wended likenings of Anglo-Saxon and Scandinavian godlore or at least some Interpretatio romana to atoken an English god or goddess with their Norse namesake.

Yet it is this very lack of likening in Béda’s work that speaks to the worth of his witness.   Béda’s betellings of the old belief are what we now might call “matter of fact.” Offhandedly given and as an afterthought to his reckoning of the Christian Easter, the straightforwardness of Béda’s sidetrack into the Anglo-Saxon year was neither written to trothwend, as the Anglo-Saxon kings were now fully Christian, nor to damn, as was the case with those who later wrote against the thew of the Danes. Indeed, that heathendom was within Béda’s living memory yet no longer thought a threat to Christian kingship sets him in a place uninhabited in history by any other Anglo-Saxon author.  No writer before nor after had such freedom as to speak so frankly of heathen belief.   Thus, whilst it is only shared as an aside to his reckoning of the Christian Easter, the heathen lore betold by Béda in his tallying of the Anglo-Saxon géarmæl should, in nowise, be taken lightly.